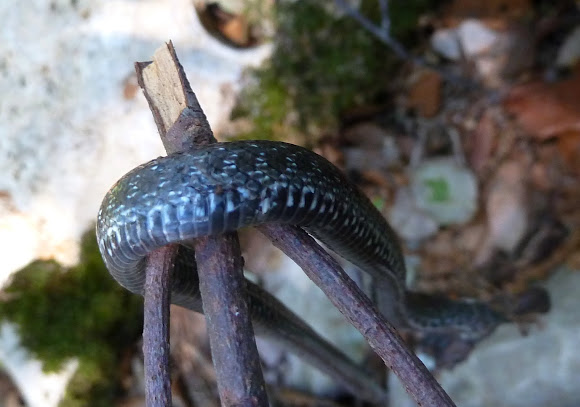 Found it on some rocks in the forest, not far from the beach, I guess someone stepped over it ;( poor little thing it was still alive moving, although I believe not for long :( Then some people came by and saw me taking photos and hysterically yelled " snake snake" with the horror in their eyes...that's so disappointing to know that people are entering in the strictly protected area and expecting not to see their inhabitants and plus being satisfied cause the snake is "a least a dead snake".... About the species: They are characterised by dark, slim, shinny bodies. They hatch at around 30 cm, averaging about 110 cm growing up to 200 cm. Their scales are very smooth and in the correct light this snake shines. Juveniles can easily be confused with juvenile Grass snakes, also having a yellow collar on their neck. Juveniles are light green or brownish-green with various darker patterns along the flanks and on their back. They appear to have two darker patches in the form of lines running on the top of the flanks. Adults are much more uniform, sometimes being olive-yellow, brownish-green, sometimes almost black. When they have a pale colour, sometimes two darker lines can be visible, but if their body colour is dark, they usually have white freckles all over their body. Their belly is yellow as in most rat snake species

The contiguous area of the previous nominal subspecies, Zamenis longissimus longissimus and now the only recognized monotypic form covers most of France except in the north (about up to the latitude of Paris), the Spanish Pyrenees and the eastern side of the Spanish northern coast, Italy (except the south and Sicily), all of the Balkan peninsula down to Greece and Asia Minor and parts of Central and Eastern Europe up until about the 49th parallel in the eastern part of the range (Switzerland, Austria, South Moravia (Podyjí/Thayatal in Austria) in the Czech Republic, Hungary, Slovakia, south Poland (mainly Bieszczady/Bukovec Mountains in Slovakia), south-west Ukraine). Further there are isolated populations in western Germany (Schlangenbad, Odenwald, lower Salzach, plus one - near Passau - connected to the contiguous distribution area) and the northwest of the Czech Republic (near Karlovy Vary, the northernmost known current natural presence of the species).[3] Also found in a separate enclave south of Greater Caucasus along the Russian, Georgian and Turkish northeastern and eastern shores of the Black Sea. Two further enclaves include the first around lake Urmia in northern Iran, and on the northern slopes of Mount Ararat in east Turkey, roughly half-way between the former and the Black Sea habitats.V.L. Laughlin hypothesized that parts of the species' geographical distribution may be the result of intentional placement and later release of these snakes by Romans from the temples of Asclepius, classical god of medicine, where they were important in the medical rituals and worship of the god

The common name of this snake 'Aesculape' refers to the classical god of healing (the Greek Asclepius and Roman Aesculapius), this snake was encouraged around temples dedicated to him. This species is carried in an annual religious procession in Cucullo situated in central Italy.

stepping over it? rather stupid jumping around on it and hysterically screaming make it dead make it dead ... :/

stepping over it? rather stupid jumping around on it while hysterically screaming go away go away or make it dead make it dead ...

Tnx Tina, I believe I did honor it at least a bit!

Wonderful information! You gave this snake the "after-life" honor it deserved!

It wasn't because I have found it I believe not even a min after somebody step over it, but it surely didn't survive!