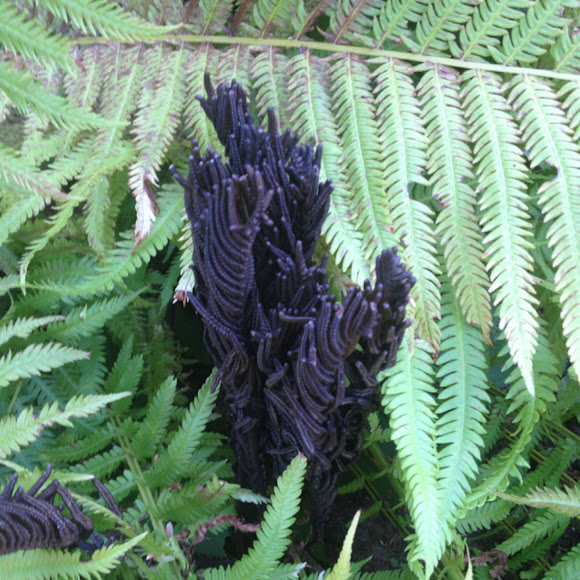 Matteuccia struthiopteris (common names ostrich fern or shuttlecock fern) is a crown-forming, colony-forming fern, occurring in temperate regions of the Northern Hemisphere in eastern and northern Europe, northern Asia and northern North America. The species epithet struthiopteris comes from Ancient Greek words, struthio meaning ostrich and pterion meaning wing. Ostrich Fern Foliage It grows from a completely vertical crown, favoring riverbanks and sandbars, but sends out lateral stolons to form new crowns. It thus can form dense colonies resistant to destruction by floodwaters. The fronds are dimorphic, with the deciduous green sterile fronds being almost vertical, 100–170 cm (39–67 in) tall and 20–35 cm (7.9–14 in)) broad, long-tapering to the base but short-tapering to the tip, so that they resemble ostrich plumes, hence the name. The fertile fronds are shorter, 40–60 cm (16–24 in) long, brown when ripe, with highly modified and constricted leaf tissue curled over the sporangia; they develop in autumn, persist erect over the winter and release the spores in early spring. Matteuccia species are used as food plants by the larvae of some Lepidoptera species including Sthenopis auratus.

The ostrich fern is a popular ornamental plant in gardens. It has gained the Royal Horticultural Society's Award of Garden Merit. While choosing a place of planting it should be taken into account that these ferns are very expansive and its leaves often lose their beauty throughout the summer, especially if not protected from wind and hail. The tightly wound immature fronds, called fiddleheads, are also used as a cooked vegetable, and are considered a delicacy mainly in rural areas of northeastern North America. It is not considered advisable to eat uncooked fiddleheads because illness has been traced to that practise. The sprouts are also picked all over Japan, ("kogomi" in Japanese) where they are a delicacy.

Oh, gosh no, Emily ... don't drive so far away! The major points have been touched on, you can always follow up some other time. Thanks for posting such a thought-provoking spotting!

I really have no idea about its strange colors. I regret that I live more than 4 hours away from where this unusual species exists! I'm trying to get some more pictures to help give a few more perspectives on it. Interesting, indeed!

Yes, you can't help but discover things at Project Noah. Best thing about it. I agree with martinl on the ID. But like chesterbperry, I think the color is more than a little weird ... he made reference to the blue-ish blotches on the frond at the top of the frame. Like him, I wonder if the plant is diseased. Maybe the fertile frond is showing the color change more intensely. Eeeen-teresting!

Thank you all for the insightful contributions to the unique species! I've enjoyed the discovery!

Looks like you figured it out martin, but that color is not typical.

I will follow up with her tomorrow and see if I can get some more pictures. To be continued...

It seems the "Sensetive Fern" produces a spore frond. http://joebartok.blogspot.com.au/2012/06...

If it's not a hassle, it would be worth going back to take more photos and ask the lady more questions about how this happens ...

The woman who owned this fern said it does this every year (????). There were a few of these black clumps amidst a ton of healthy looking plants!

We would expect ferns to produce spores underneath their fronds in tiny brown structures. New fronds normally unroll as they form from buds.

Well ferns reproduce from spores not seeds, many ferns produce fertile and infertile fronds with obvious differences, but I have never seen anything like this. I notice some of the fronds in the background have some of the same color, I wonder if there is something in the soil, or if they could be diseased.

I figured it was part of the fern but a part that contained the seeds? It is so alien looking!

This is going to be an interesting story.

If that thing is actually part of the fern, I assure you it is not a seedpod.