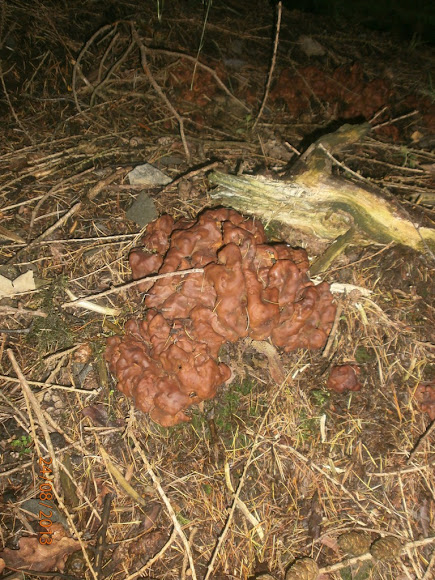 flesh felt rubbery to finger tips but was brittle when bent. the first fruitbody was probably about 30cm across and there were quite a lot of them arranged in a semicircle around the base of the tree in the second photo. There was the remains of a (probably) rhododendron fire nearby. By the looks of nbngateways page Rhizina undulata is infrequent. it hasn't been recorded in this 10km square yet: http://www.searchnbn.net/interactive/map... according to wikipedia R. undulata is a disease of conifers and often occurs after there have been fires in the area since the spores have an optimum germination temperature of about 35-40 celcius http://en.wikipedia.org/wiki/Rhizina_und...

gm - i hhave a sample for now

Hi Abigail; I think this fungus I found could be Pine Firefungus. I think you found a different species (was it this spotting? http://www.projectnoah.org/spottings/374...), if I had to guess I'd say it was a red staining Boletus species. I'd need a photo of the underside to be more sure

What is this? I spotted something like this today near oak trees in Hatfield