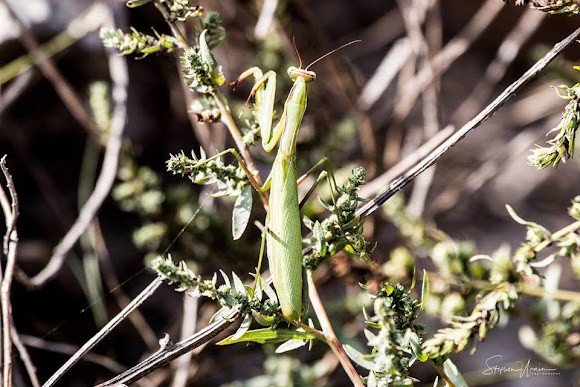 A large hemimetabolic insect in the family of the Mantidae (‘mantids’), which is the largest family of the order Mantodea (mantises). Their common name praying mantis is derived from the distinctive posture of the first pair of legs that can be observed in animals in repose. It resembles a praying attitude. Both males and females have elongated bodies with two pair of wings. The most striking features that all Mantodea share are a very mobile, triangular head with large compound eyes and their first pair of legs (the ‘raptorial legs’) which is highly modified for the efficient capture and restrain of fast moving or flying prey

The Praying Mantis is found in many differing habitats. They are generally located in the warmer regions, particularly tropical and subtropical latitudes. Most species live in the tropical rain forest, although others can be found in deserts, grasslands and meadowlands.

This one is a female seen at Platja de Puçol / Playa de Puzol, Valencia