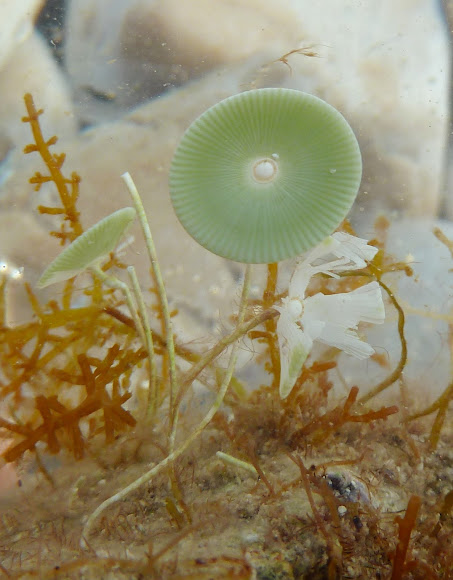 Typically found in subtropical waters, Acetabularia is a single-celled organism, but gigantic in size and complex in form, making it an excellent model organism for studying cell biology. In form, the mature Acetabularia resembles the round leaves of a nasturtium, is 0.5 - 10 cm tall and has three anatomical parts: a bottom rhizoid that resembles a set of short roots; a long stalk in the middle; and a top umbrella of branches that may fuse into a cap. The single nucleus of Acetabularia is located in the rhizoid, and allows the cell to regenerate completely if its cap is removed. The caps of two Acetabularia may also be exchanged, even from two different species. In addition, if a piece of the stem is removed, with no access to the nucleus in the rhizoid, this isolated stem piece will also grow a new cap.

Acetabularia are among the largest single-celled organisms, having also a remarkably large nucleus. During sexual reproduction, the nucleus undergoes multiple rounds of mitosis, forming many daughter nuclei all within one nuclear membrane. These nuclei undergo meiosis and are transported to the tips of the branches, the sporangia, where they are released as gametes

You are welcome namitha, tnx for your nice comment, really appreciate that you like my marine spotting ;)

I agree, it is definitely very interesting . Thanks for sharing injica.

I think that's the most interesting thing I've heard all day. No, wait, I'm sure of it.