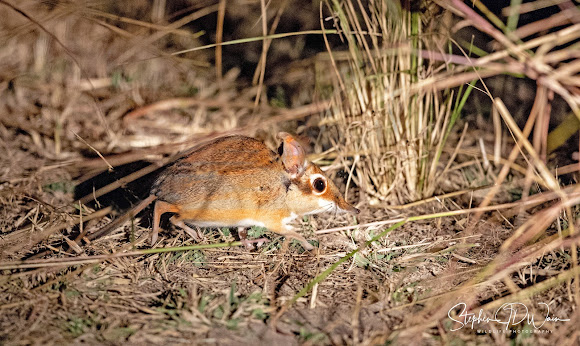 They take their name from their long pointed head and very long, mobile, trunk-like nose. They have rather long, legs for their size, which move in a hopping fashion like rabbits. They have a hunchbacked posture and a long, scaly tail. A gland on the underside of the tail produces a strong scent used to mark territories. This musky smell serves as a deterrent against many carnivores.

Dense forest to open plains - the species as a whole is widely distributed throughout Africa, excluding western Africa and the Sahara region, but despite their wide distribution range, sightings are still rare. The four-toed elephant shrew is one of the most widespread of the species, occurring from Central and Eastern Africa to the Northeastern corner of South Africa. The four species of giant elephant shrew prefer to live in forests, closed-canopy woodlands, and thickets, usually with a floor densely covered by leaf litter. The chequered elephant shrew is found in Central Africa; the golden-rumped elephant shrew is endemic to Kenya; the grey-faced shrew is confined to two forests in Tanzania, and the black and rufous elephant shrew is found in East Africa. Smaller elephant shrew species can be found in the uplands of southern, eastern, and northwestern Africa, in dry forests, scrub, savannas, and open country covered by sparse shrubs of grass. They eat “leaf litter invertebrates” such as ants, termites, beetles, spiders, millipedes, and earthworms. Unlike many other small mammals, the elephant shrew feeds during daylight. They play a significant role in maintaining natural checks of insect populations.

Elephant shrews form monogamous pairs that live in common territory of several acres, but they are seldom together. They do, however, keep track of each other’s whereabouts through scent markings. Elephant shrews are not, in fact, shrews. Recent evidence suggests that they are more closely related to a group of African mammals that includes elephants, sea cows, and aardvarks. Elephant shrews (also called sengis) are represented by a single family, the Macroscelididae, including four genera and 19 living species.

Congratulations on your SOTW. Great photo, especially considering the speed they move at! Thanks for sharing.

Congrats Steven. Great notes and extremely well done on catching this fast little critter in the camera frame. I know how hard that is to do!

Congratulations on the spotting of the week, what a great shot :)

Thank you for all your kind comments. Nearly every night on game drives we would see these little shrews moving at amazing speed. I always has my camera ready and then one time the one you see just stopped (maybe by our spotlight) and I managed a photo. The shrew had gone seconds later. Pure luck!

A first for Project Noah. Congratulations on the SOTW Stephen.

Congratulations Stephen , your Elephant Shrew
hynchocyon cirnei, has been voted Project Noah’s Spotting of the Week,by the Ranger team!

Project Noah’s Spotting of the Week is an Elephant Shrew photographed by Stephen Wain in the Muchinga Province of Zambia!

This photograph is the first spotting of this species on Project Noah!

Elephant shrews are small mammals that feed primarily on insects. They are active during the day and able to escape predators because they are incredibly fast and well-camouflaged.

Elephant shrews live in monogamous pairs and range across the southern part of Africa in a variety of habitats.

Congratulations! This is the first spotting of this species on Project Noah!

What a nice spotting! Were you out in a field one evening and then able to photograph it? Did it stop moving when caught in the light?

Thanks for sharing this Stephen. That's an amazing little elephant. ;-)

What an amazing animal. Great spotting, Stephen, and the notes are awesome!