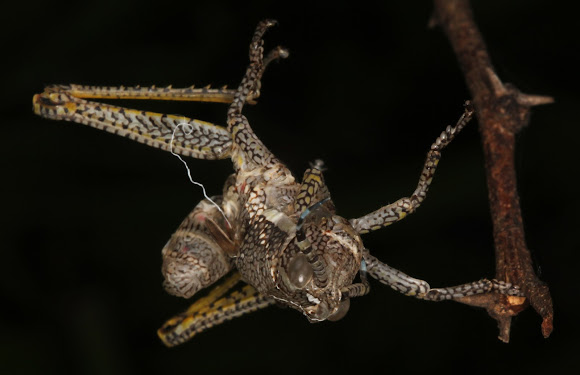 The first pic is of the molted skin and the second one is of the freshly molted grasshopper. In biology, moulting or molting, also known as sloughing, shedding, or for some species, ecdysis, is the manner in which an animal routinely casts off a part of its body (often but not always an outer layer or covering), either at specific times of year, or at specific points in its life cycle. For more information on Molting please refer to: http://en.wikipedia.org/wiki/Moulting

Seen near a farm.

The grasshopper feeds on the poisonous plant Calotropis gigantea. Upon slight pinching of the head or abdomen, the half-grown immature form ejects liquid in a sharp and sudden jet, with a range of two inches or more, from a dorsal opening between the first and second abdominal segments. The discharge is directed towards the pinched area and may be repeated several times. The liquid is pale and milky, slightly viscous and bad-tasting, containing cardiac glycosides that the insect obtains from the plant it feeds upon.