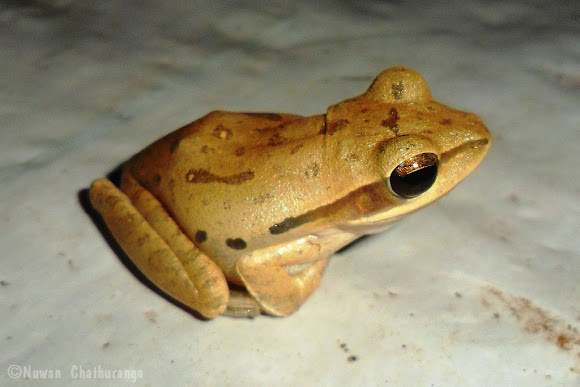 Spotted tree frog is widely distributed in both low country dry and wet zones including arid zone up to 460m above sea level. It is commonly encountered in anthropogenic habitats and during day time it use to hides in cool places such as inside bath rooms and banana groves. This frog can change its color up to certain extent and dorsal color may vary from light brown and yellow to reddish brown. Dark brown patches on dorsal surface can be seen sometimes and hence the name maculatus, since maculatus in Latin is the one who bear spots or patches on its body. Loreal region is dark brown and dark cross bars can be seen on dorsal side of limbs.

Such a pretty monk frog! No, not an ID, just teasing!