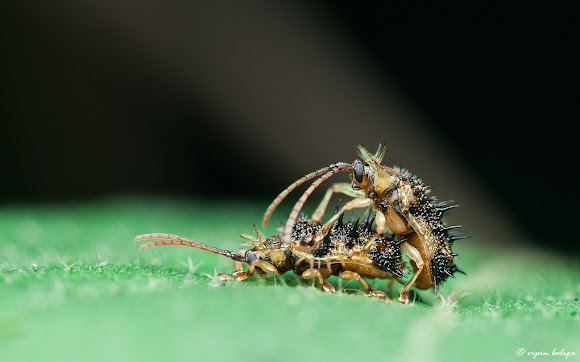 Bed of Nails - Spiny Leaf Beetle : Mating I had photographed a Spiny Leaf Beetle a year ago. It is then I began to think how they might go about the process of reproducing, given the heavily fortified armor around the female. Today I found the answer! :-) Found this pair of mating Spiny Leaf Beetles today. I was shocked and mesmerized at the same time. Look at them, they are copulating just like every other Beetle even with those large spines surrounding them! A very delicate maneuver indeed. :-) They were on a leaf which was rocking violently to the wind. But they never budged for more than an hour, until they were done. Size: 7mm approx ( female)