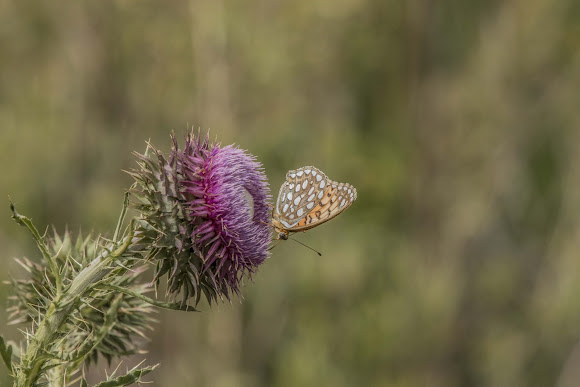 FW bright orange with a row of black spots and numerous irregular black bands; HW with concentric rows of black markings, giving an overall more spotted appearance than Monarch (also lacks Monarch’s black borders on both wings). Below: FW bright orange and brown, with pale spots toward tip and irregular black bands; HW brownish-orange with two bands of shiny, silvery spots separated by a wide, cream-colored band. This wide band (and lack of an inner FW spot above) separate Great Spangled from the very similar (and quite rare) Aphrodite Fritillary, which has a narrow band on the HW below and an isolated spot on the inner FW above. Females, which emerge later, are usually larger and darker than males.