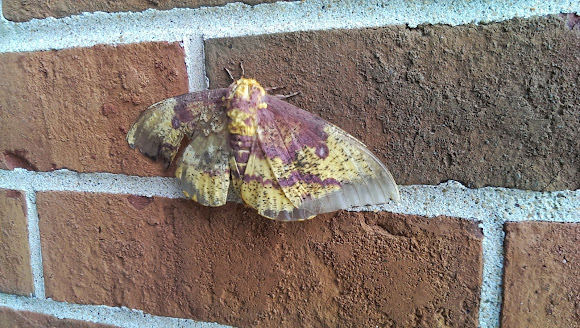 Pale yellow and purple patterns on wings and body, with small black flecks in the wings. Was easily over 4" from wingtip to wingtip. A bit messy from a rainstorm, but still quite lovely. Wings were a bit beat up, sadly :(

Found in Northeast Missouri, near mostly fruit and nut orchards, but other wooded areas are nearby

Sorry this is so blurry. It was raining and the poor thing was frightened and vibrating as it took refuge on this wall. I didn't want to disturb it more than I already had. Surprising amount of large, colorful, moths here this year!