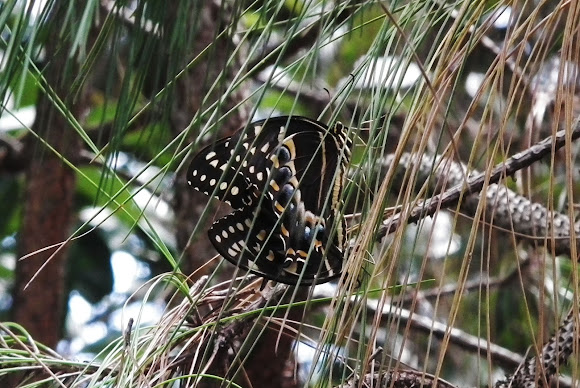 A rather large, dark-winged swallowtail marked with yellow and white bands. Sometimes known as the Laurel Swallowtail as the main host plants for the larvae belong to the laurel family (bay trees). Found only in the south-eastern United States. In the northern part of it range, it flies between May and October, but in Florida, it will have several broods in a year, flying from March to December. This spotting shows two swallowtails mating. They flew together like this.

Found mainly in swampy forests, like the one we came across. This forest was in Orlando, FL.

I believe the one of the top is the male, from what I've read. They were flying locked together like this, but I haven't read about this behaviour anywhere else, so I'm not 100% sure if they're mating or courting.