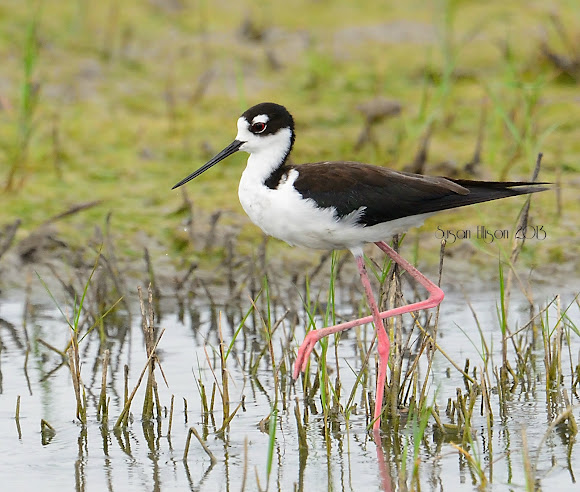 Adults have long pink legs and a long thin black bill. They are white below and have black wings and backs. The tail is white with some grey banding. A continuous area of black extends from the back along the hindneck to the head. There, it forms a cap covering the entire head from the top to just below eye-level, with the exception of the areas surrounding the bill and a small white spot above the eye. Males have a greenish gloss to the back and wings, particularly in the breeding season. This is less pronounced or absent in females, which have a brown tinge to these areas instead. Otherwise, the sexes look alike

inhabit shallow wetlands from the western United States to Central America and parts of South America. In the United States, Black-necked Stilts are commonly found in salt ponds, flooded lowlands, or shallow lagoons. Human-maintained wetlands such as sewage ponds or flooded pastures are particularly suitable habitats for these birds, since such environments have some sparse vegetation without being too overgrown. The endangered Hawaiian subspecies, the Ae'o, lives in wetlands, mudflats, and ponds on all the major islands.

•Five species of rather similar-looking stilts are recognized in the genus Himantopus. They have the second-longest legs in proportion to their bodies of any bird, exceeded only by flamingos. •The Hawaiian subspecies of Black-necked Stilt has the black of its neck reaching much farther forward than the mainland forms. Habitat loss and hunting led to the decline in its numbers. It uses primarily the few freshwater wetlands found on the Hawaiian Islands.

Hey Des, in the summer, drive along the Los Angleles River and you will see some.

Iv'e always wanted to see on of these, never got the chance though.