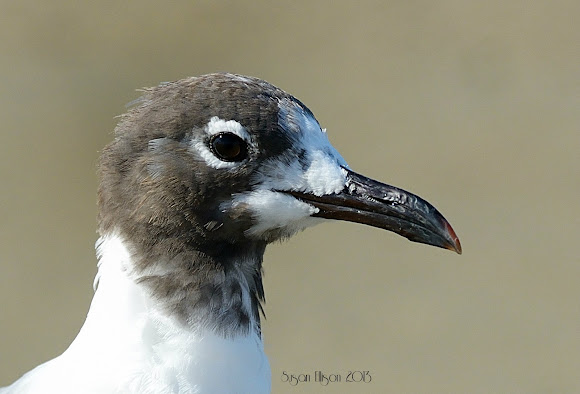 Laughing Gulls are medium-sized gulls with fairly long wings and long legs that impart a graceful look when they are flying or walking. They have stout, fairly long bills. Laughing Gulls are medium gray above and white below. Summer adults have a crisp black hood, white arcs around the eye, and a reddish bill. In winter, the hood becomes a blurry gray mask on a white head. The legs are reddish black to black. Immatures are much browner and more subtly patterned than adults; they take 2-3 years to gain adult plumage.

Laughing Gulls are a coastal species and are only occasionally seen very far inland. Look for them in plowed fields, garbage dumps, parking lots, and shorelines. They nest, often in large numbers, on islands near the shore but safely isolated from terrestrial predators.

•The adult Laughing Gull removes the eggshells from the nest after the eggs hatch. If the shells are not removed, a piece can become lodged on top of the slightly smaller unhatched third egg and prevent it from hatching.