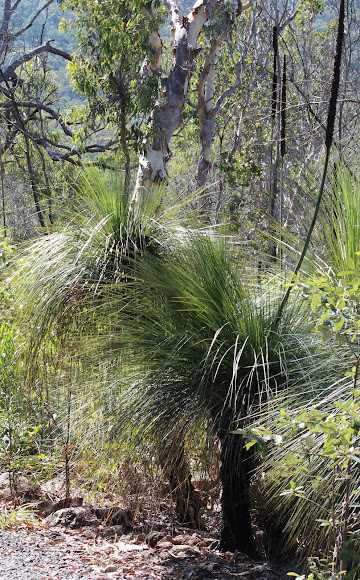 All are perennials and have a secondary thickening meristem in the stem. Many, but not all, species develop an above ground stem. This is rough-surfaced, built from accumulated leaf-bases around the secondarily thickened trunk. The trunk is sometimes unbranched, some species will branch if the growing point is damaged and others naturally grow numerous branches. Flowers are borne on a long spike above a bare section called a scape, the total length can be up to four metres long in some species. Flowering occurs in a distinct flowering period, which varies for each species. Flowering can be stimulated by bushfire, in which case it occurs in the next flowering period after the fire. - Wiki Xanthorrhoea is important to the Aboriginal people who live where it grows. The flowering spike makes the perfect fishing spear. It is also soaked in water and the nectar from the flowers gives a sweet tasting drink. In the bush the flowers are used as a compass. This is because flowers on the warmer, sunnier side of the spike (usually the north facing side) often open before the flowers on the cooler side facing away from the sun. -Wiki The leaves produce a hard waterproof resin, which could be collected from the base of the trunk. This resin melts when warmed, but sets hard when cold. It had a number of uses including; Forming glue by mixing it with charcoal, beeswax or fine sand and dust. Gluing the cement stone heads to wooden handles and spears to shafts and tips. Waterproofing bark canoes and water carrying vessels.

Found in many habitats throughout Australia, from rocky dry ridges to swampy heathlands.

Me too Mark & fortunately, where I live now, there are gazillions of them :)