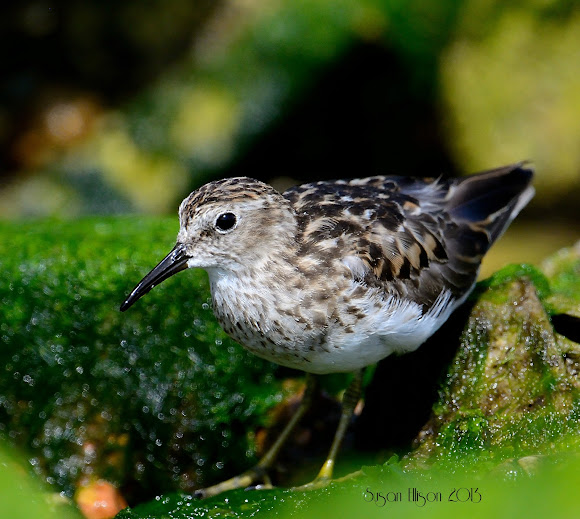 This species has greenish legs and a short, thin, dark bill. Breeding adults are brown with dark brown streaks on top and white underneath. They have a light line above the eye and a dark crown. In winter, Least Sandpipers are grey above. The juveniles are brightly patterned above with rufous colouration and white mantle stripes.

Least Sandpipers breed in tundra and boreal forests across the extreme northern regions of North America. They nest in coastal wetlands, bogs, sedge meadows, and tussock heaths. At the southern reaches of their breeding range, in Nova Scotia and British Columbia, they also nest in sand dunes. During migration they stop on coastal mudflats, rocky shorelines, and inland habitats including wet meadows, flooded fields, and muddy edges of lakes, ponds, and ditches. They winter from the southern United States through the northern half of South America in lagoons, mangrove forests, wet ditches, swamps, wet fields, mudflats, saltmarshes, tidal sloughs, and the edges of lakes, ponds, and rivers

•The Least Sandpiper is the smallest shorebird in the world, weighing in at about 1 ounce and measuring 5-6 inches long. Males are slightly smaller than females. •Researchers studying Least Sandpipers discovered a new feeding mechanism. While probing damp mud with their bills, the sandpipers use the surface tension of the water to transport prey quickly from their bill tips to their mouths.