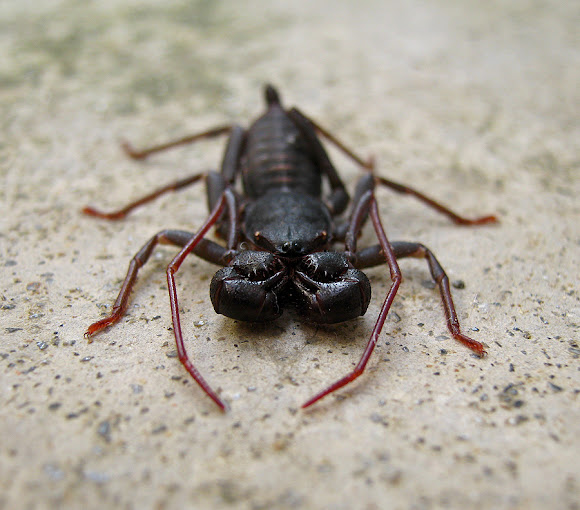 I am finally back from Semporna to share with all of you my spotting #500! A small Vinegaroon measuring only at 25mm in length (from forehead to abdomen tip, excluded palps). It has a pair of eyes located in the front while 3 pairs of smaller white eyes at the side of its head. Its palps is modified into spiky pincers to capture prey while its front pair of legs have evolved into sensors which serve as an antennae. This species has a long thin tail to spray acids with vinegar smell to ward off predators. Unfortunately this specimen has somehow lost its tail.

Lives among natural debris on the ground. This individual was spotted in my house kitchen in Tawau, Sabah.

>>>Map accuracy : 500m diameter. This animal has always been in my spotting wishlist so it is a great achievement to be able to finally see and photograph a Hypoctonus gastrostictus. However, my mother was the one who first saw it crawling in the kitchen and called me over.

Thanks for your comments too, Mona and Suzanne.
:-)

Thank you Ashley and Luis.
It is really a great honour.

Great series Chun and congrats on your 500.

Congrats on 500, and what a neat looking creature!