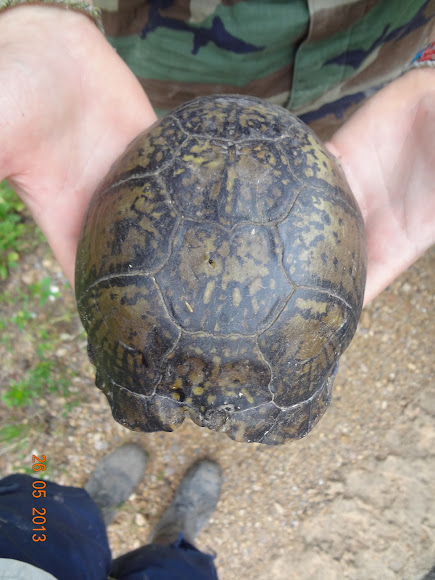 The Gulf Coast box turtle is a subspecies of the Eastern box turtle. They are larger than typical. I couldn't believe that this one was that large (those aren't kids hands). The dorsal and ventral patterns are similar,mottled light and dark dorsal patterns that may tend to dull with age, and yellow ventrals with some dark mottling (but not the distinctive pattern of T. ornata). They also can completely close the hinges on their shell (the "box") which distinguishes them from sliders and other river turtles (aside from the fact that box turtles are terrestrial instead of aquatic).

Box turtles are not really swimmers, and so although they can be found on the edges of wetlands, they mostly prefer non-flooded woodlands and grasslands. There is surprisingly not much info available on the gulf coast subspecies. I was told by a turtle researcher out of ULA-Monroe that they're not very common. This one was found crossing the road near Bayou Cocodrie NWR. The habitat around is bottomland hardwood forest, and Bayou Cocodrie NWR has some of the oldest untouched hardwoods. There's a unit on the Refuge that hasn't been logged since the 1800's. It's a very cool place.

The (not very developed) Wikipedia entry for T. c. major: http://en.wikipedia.org/wiki/Gulf_Coast_... I'm not really a splitter or lumper when it comes to species (I usually go with whatever is the more generally accepted consensus), but this guy was pretty big, so I went with the subspecies ID. I thought it was a pretty cool find.

Yep! Beautiful turtles, i had one for 12 years (captive bred) till sisters dog set it free (long story), luckily in its native habitat...