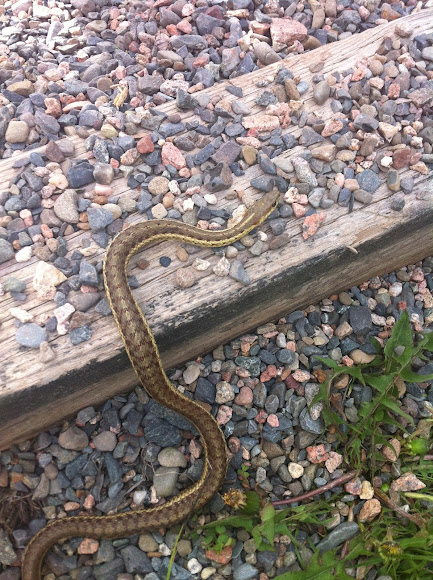 The Eastern Garter Snake is one of our most common snakes. It grows up to four feet long. It's color patterns can vary, but it almost always has three yellow stripes. Usually there is a checkerboard pattern of dark spots between the stripes.

These snakes are usually found near water or moist places, including marshes, streams, damp woods, wet meadows, parks, gardens, weed patches, farms, and forest edges. Garter snakes are very active, and can be found day or night, though they're most active during the day. They are usually seen among vegetation (plants). Garter snakes have many types of prey, including: frogs, toads, salamanders, earthworms, small fish, tadpoles, mice, bird eggs, slugs, crayfish, leeches, insects, and small snakes. They also eat carrion, and often get run over by cars when they try to eat some small dead animal (such as a frog) off a road.

Students found this little snake near our swing set at school. It was the first one we discovered this year. In past years these snakes could be see many days out on our playground warming up in the sun.