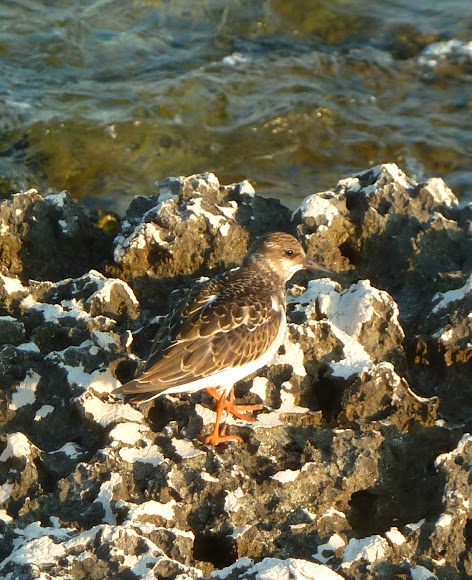 It is a small wading birdI, 22 - 24 cm long with a wingspan of 50 - 57 cm , one of two species of turnstone in the genus Arenaria. It is now classified in the sandpiper family Scolopacidae but was formerly sometimes placed in the plover family Charadriidae. Ruddy Turnstones typically feed on insects in the summer, though their diet is extended to other invertebrates such as crustaceans, mollusks, and worms in other seasons. They have also been observed preying on the eggs of other bird species such as gulls, terns, ducks, and even other turnstones, though this behavior is uncommon. In the majority of observed cases, Turnstones typically go after undefended or unattended nests, puncturing the shells with their beaks to get at the contents within

It is a highly migratory bird, breeding in northern parts of Eurasia and North America and flying south to winter on coastlines almost worldwide. It is the only species of turnstone in much of its range and is often known simply as Turnstone.

This is one of the newest birds that recently started visiting ornithological park Palud :)

Hahah, we are both working for jopy :)

Of course, I love to please her ;D ha ha ha

Injica you got a bird just because jopy asked for brown colors :)

Thank you! That would be the 2nd time ever that is seen there ;)))

Yes it is, a juvenile. Turnstone in English.