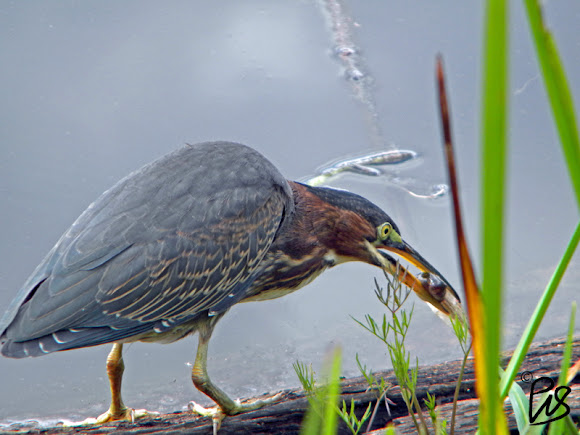 Juvenile male. The Green Heron is relatively small; adult body length is about 44 cm (17 in). The neck is often pulled in tight against the body. Adults have a glossy, greenish-black cap, a greenish back and wings that are grey-black grading into green or blue, a chestnut neck with a white line down the front, grey underparts and short yellow legs. The bill is dark with a long, sharp point. Female adults tend to be smaller than males, and have duller and lighter plumage, particularly in the breeding season. Juveniles are duller, with the head sides, neck and underparts streaked brown and white, tan-splotched back and wing coverts, and greenish-yellow legs and bill. Hatchlings are covered in down feathers, light grey above, and white on the belly.

I had so many great shots it was difficult to pick which to post. In the first two he was enjoying a tadpole he had just caught. In shot #4 he was eyeing the damselflie and dragonflies that were overhead. In shot #5 he was stalking a damselfly and caught it moments after I took the photo. In shot #6 he was stalking some unseen prey.

Cool series. Consider adding it to our new mission - http://www.projectnoah.org/missions/1279...