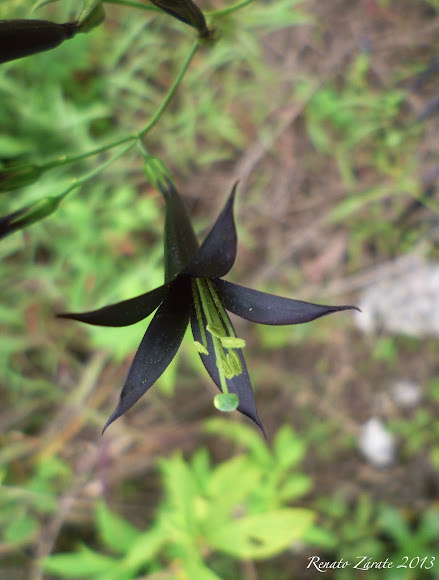 While out exploring a canyon under the San Cristobal Bridge, we found a black wild flower, something I never thought existed. Black is very rare for a flower. I've heard of a black orchid and I know of a black rose and an almost black Chrysanthemum that were bred artificially. From a distance (last 2 pictures), this was a low growing bush with long slender leaves and had what looked like dry black seed pods hanging from the branches. These "pods" turned out to be completely black flowers, some open with green pistils and stamen and others still closed in long tubes.

Forest and secondary growth under the San Cristobal Bridge on the Highway between San Cristobal de Las Casas and Tuxtla Gutierrez, km 15, 1,500 meters.

This has turned out to be a very rare flower and the blackest flower known in the plant kingdom. It occurs sparsely from Southern Mexico through Central America. Family Gentianaceae. It is called the Flower of Death or Flor de Muerte. I think it is very exciting to have actually seen it. "The Blackest Flower in the World. A low growing perennial with lanceolate leaves and drooping bell-shaped flowers that are completely black in color. Being the rarest of flower colors, black has always held a special fascination. A little-known Mexican species with the blackest flowers ever seen." http://toptropicals.com/catalog/uid/Lisi.... Did you know you can buy just 20 seeds for 30 pounds in England? http://www.nickys-nursery.co.uk/garden-s.... See this neat paper on the chemistry of what makes this flower black with high levels of anthocyanins and flavones (and their co- pigmentation) which is thought to account for the almost complete absorption of both UV and visible wavebands observed by reflectance photography. http://www.znaturforsch.com/ac/v59c/s59c.... According to the authors "The flowers of L. nigrescens were scentless during the day and appear black to human beings. The floral form is reminiscent of flowers pollinated by hummingbirds, moths, or long-tongued bees, and as such was thought possibly to be reflective in ultraviolet. However, spectral reflectance photography revealed that the flower was non-reflective in the ultraviolet part of the spectrum. The analyses of the floral pigments were in accord with the almost complete absorbance of all wavebands of both UV and visible light. Field observations resulted in the capture of a suite of visiting insects, all bees. These included Partamona bilineata Say and Pleibeia frontalis Friese of the tribe Meliponini, both stingless social bees. Also identified were three separate species of Lasioglossum, subgenus Dialictus (tribe Halictini), one of which is an unknown species. These were the only recorded visitors during field observations at three populations. The tubular floral structure and pendant presentation is consistent with flowers pollinated by hummingbirds or hovering moths but no records exist of either pollinator being attracted by black flowers. How a truly black flower of the L. nigrescens type might attract pollinators remains to be discovered, but it is certainly a peculiar natural anomaly awaiting explanation."

Thank you Joshua :) truly a marvel.

Thank you ceejayalyssa, I never thought it possible either!

thank you Lauren for sharing this rare and pretty flower. i never thought this existed!

Thank you ceherzog and mauna :)

Lauren, these black flowers are beautiful!

Thank you Leuba, Despina, Mark and Adarsha. :) Thank you Marta, I will try to put it on FB (the Noah Facebook page? Am I allowed to do that?)

Omg! i never thought one can research this much about a flower :)
Wonderful presentation with excellent photographs :) Very informative :)

Such an amazing flower!!! Congrats @Lauren!!!

What a wonderful spotting ! Thanks for sharing this and information, Lauren.

This is such an unusual spotting, Lauren! I think a part from black tulips it is the first time I see a black flower in the wild like this. I think you should also share the spotting in FB so that more people can notice. Is very unique! Thanks for sharing!

Exotic beauty! I hope you will find out what this flower is.

You are very welcome Lauren, and thank you for bringing this unique beauty to our attention :)

Fascinating Flower, I will be reading about it also, thank you for sharing, LaurenZarate.

Thank you so much chesterbpery! I was thrilled with the identification and have been reading everything I can find on this flower. It is really fascinating. It was (is) supposedly used in native indian medicine, but I haven't found for what yet. Chiapas is full of brujos and curanderos who still practice native medicine and maybe I can find one to ask him.