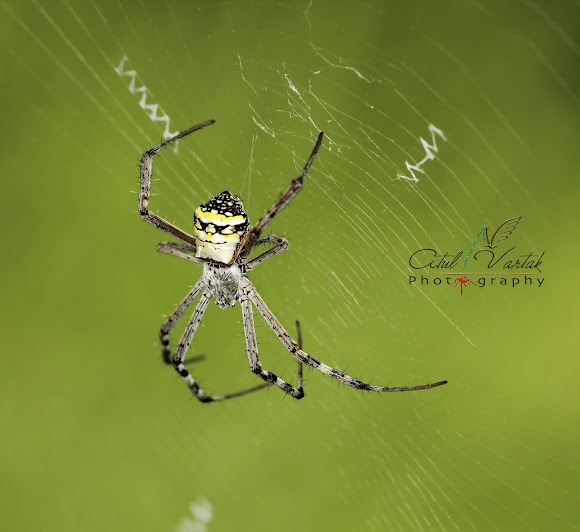 The genus Argiope includes rather large and spectacular spiders that often have a strikingly coloured abdomen. Whats even more interesting is the spiders Web !!! Their webs have something very peculiar called as the Stabilimenta.(the zig zag decorations on the web ) the stabilimenta serve many purposes .... Stabilimenta may serve as camouflage, an idea that is bolstered by the fact that they are constructed only by spiders that typically sit in the hubs of their webs, out in the open. Camouflage would be helpful in concealing the spider's presence from visitors who would like to avoid them, as well as in preventing predators from spotting an easy meal. The stabilimentum may also serve as a warning to birds, to keep them from flying into the web. This would reduce the need to rebuild or repair the web. On the other hand, it also makes the web more obvious to those birds who are fond of eating spiders... The silk used to make the stabilimentum has been shown to reflect ultraviolet light very efficiently. As a result, this part of the web would be highly attractive to insects, luring them to its threads.

Check out the phantom Mask On the abdomen !!!!

Hi Doc, you still have this as Argiope pulchella. Despite the terrible mess on the web, I think yours is Argiope anasuja. Could you do a little spider-re-check?
What do you think?

Thanks Doc !! was too lazy in searching for the id ;-)
and thank you Janine :)

i agree with the first being pulchella,i have sifted through the agriope spp lisings for radius,but have come to a halt as cannot verify the 2nd links photos location. . .

i would like to say that the latter pictures 1 and 2 wiki links, look like they could be agriope pulchella!

I could not believe that there is no ID for this one!? So I did a little research about this one. In my eyes and (!) providing the IDs of the ones from the link is correct, which you never know and always need double-check, I think yours must be Argiope anasuja. Please, verify yourself!! You are the spider Doc, not me ;-)...
http://spiderindia.lifedesks.org/files/s...
http://www.flickr.com/photos/anujnair/15...
http://www.flickr.com/photos/rdeez/20508...
These are in my eyes NOT Argiope anasuja:
http://en.wikipedia.org/wiki/File:Argiop...
http://en.wikipedia.org/wiki/File:Signat...
What do you think, Doc?

Hello Doc! Would you mind, please, check this one:
http://www.projectnoah.org/spottings/755... Thanks!