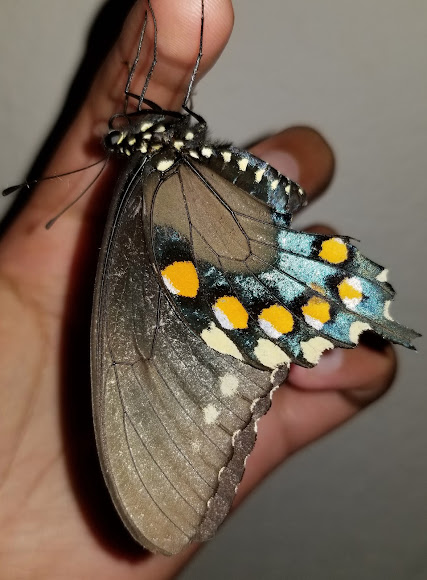 It is a medium sized swallowtail butterfly in the genus, (Battus). The genus Battus are found in North America to South America. This species is found in the eastern and central and western United states and the sub-species in California, also known scientifically known as, (Battus philenor hirsuta) which is also an endangered species due to urbanization. The butterfly has black wings and blue metallic scales on the underside of the hindwings decorated in bright orange and white spots.

The Pipevine Swallowtail feeds on (Aristolochia fimbriata), White veined Aristolochia. The species listed G5 on nature serve. The wingspan of this specimen was 85 mm, and was a female. This species is colored metallic blue and orange because it is toxic to birds.The toxin it sequesters as a caterpillar is known as Aristolochic acid which is distasteful to any animal.