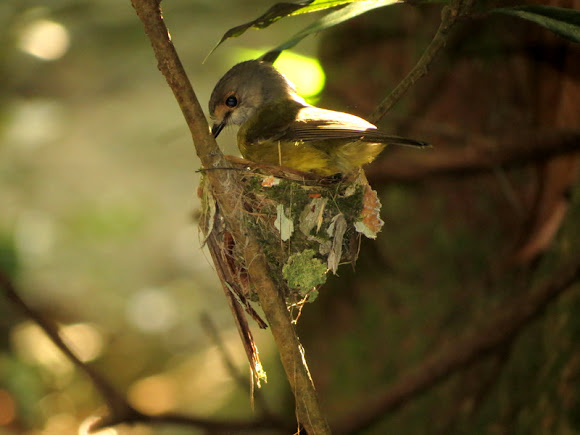 The Eastern Yellow Robin is a medium sized robin. It has a grey back and head, and yellow underparts. Southern birds have an olive-yellow rump, while in northern birds it is brighter yellow. The throat is off-white and, in flight, there is a pale off-white wing bar. The bill is black.

During breeding season, breeding pairs of Eastern Robins may lay up to three clutches of eggs. The female builds the nest and incubates the eggs. The nest is a woven cup of bark, grasses and other vegetation, bound together with spider web and lined with finer material and leaves. It is normally built in an upright tree fork, up to 20 m above the ground, but usually within 5 m. Both parents, and sometimes some other helpers, care for the young birds. This nest was only 1m off the ground.