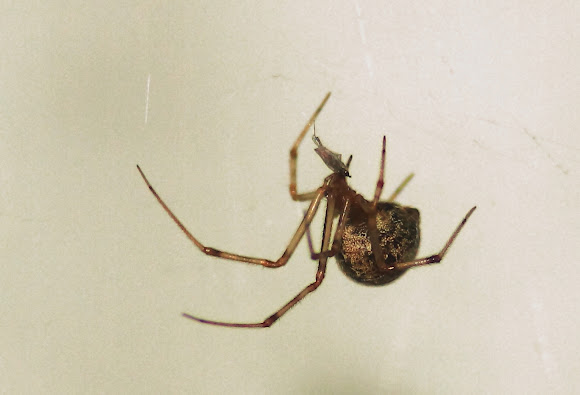 The common house spider (Parasteatoda tepidariorum), referred to internationally as the American house spider, is a spider species of the genus Parasteatoda that is mainly indigenous to the New World, with P. tepidariorum australis (common gray house spider) also encountered in some parts of Myanmar and Pakistan. American house spiders are synanthropic and build their tangled webs in or near human dwellings, often in secluded areas such as between loose walls and behind open doors and attic windows. The prey mechanism is similar to that of the other cobweb spiders: the spider follows disturbances transmitted along the web to entangle and then paralyze its prey, which usually consists of household insects and other invertebrates (often considered as pests). Appearance American house spiders are generally dull brown in coloration, with patterns of differing shades often giving a vaguely spotted appearance that is particularly noticeable on the legs. Their average body size is a quarter-inch (6 mm) long, but they can be an inch (2.5 cm) or more across with legs outspread. Their size and coloration allow the spiders to blend into the background and escape notice. Like some other species of the family Theridiidae, P. tepidariorum is similar in body shape and size to widow spiders, which have venom that is classified as potentially dangerous. Life cycle This species can live for more than a year after reaching maturity. Each egg sac contains from 100 to more than 400 eggs, with a single female producing up to 17 egg sacs. The hatchlings remain in the mother's web for several days. Diet and predation American house spiders usually feed on household pests such as flies, mosquitoes, ants and wasps. They can randomly attack grasshoppers, butterflies, cockroaches or other spiders depending on their size. If the prey is too agile, the spider will try shooting web at it from a distance before pulling the thread toward itself. Bigger females can also attract baby skinks inside their web by leaving fly remains hanging in it. Once its food dries out, the spider usually drops it to the floor in order to free space in its web, instead of destroying and rebuilding it or changing its location. Three spider species usually prey upon them: the pirate spiders of the genus Mimetus (Mimetidae), as well as two jumping spider species - Phidippus variegatus and Metacyrba undata. The latter one also often falls prey to its own food when it gets trapped in the tangling web after missing the jump on its target. Behavior Interaction with other spiders A male and female often share the same web for long periods, and several females often build their webs in close proximity. However, females will sometimes fight when they encounter each other. Interaction with humans and predators As these spiders live in constant proximity to human beings, they are not usually aggressive and will even let a human hand approach their web. Like any other spider, however, they are afraid of bigger foes, and, in most cases, will retreat behind an obstacle (such as a dried leaf or prey remains) upon perceiving more than usual disturbance to their web. Further disturbance may lead to the spider dropping down on a thread, then running away from the web. If the distance is not considerable, it will usually return to its web within a couple of days. Otherwise, it will start a new one. American house spiders possess poor vision and cannot detect any movement more than 3-4 inches away. If cornered, they will feign death as last resort. Toxicity American house spiders will bite humans only in self-defense, when grabbed and squeezed. Regular bites are dry and no more painful than a bee sting, but some females can deliver sharp, venomous bites. If venom is administered with the bite, symptoms may include swelling and itching around the area and may trigger antibody allergies in some individuals. Medical attention is not required, but rest is recommended. The venom of the American house spider is a neurotoxin similar to that of the black widow, but much less potent. It is often extracted and sold as an insecticide for farm use in the United States and Canada. It is also powerful enough to kill the same species of spider on occasion. Similarly named species The name "house spider" is also used worldwide of different spider species, notably Tegenaria domestica in Europe and Araneus cavaticus, also known as the barn spider. Many other species can be referred to as such; therefore it is preferable to use the scientific name for identification. (Description courtesy of Wikipedia)