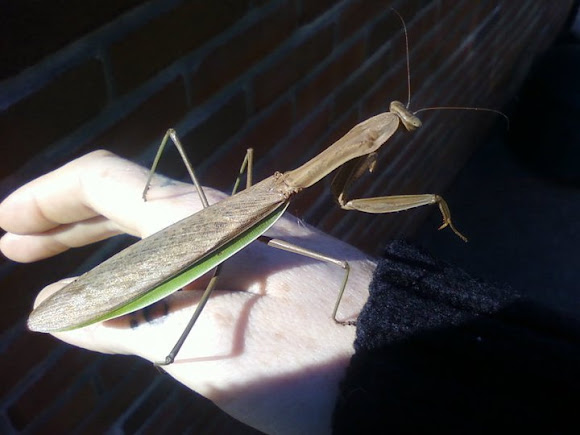 The Chinese Praying Mantis lacks the spot on the front leg. The forewings are tan with a green front edge. This species is longer on the average than the European Mantis but the sizes overlap.

In Michigan, the hatching time is late May or early June. The nymphs are tiny versions of the adults without wings. They hatch by the hundreds and quickly disperse because they are cannibals. It takes six to eight molts for them to reach the adult stage. Mating and egg laying take place in September or early October. Contrary to popular belief the female does not always eat the male after mating with him. This rumor started when laboratory raised mantis were mated. The females had not been properly fed. If the female is hungry then she will try to make a meal out of her mate. It is estimated that 30% of the matings in nature end with the male being consumed.

Hi Amanda, great spotting! The scientific name for this species is Tenodera sinensis. I would love to see this added to the global mantid mission! http://www.projectnoah.org/missions/1573...