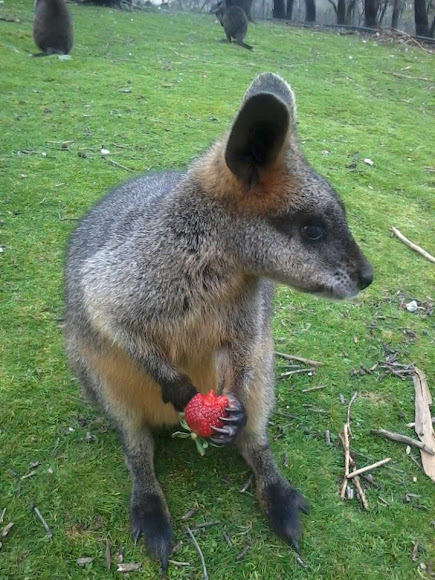 This small, stocky wallaby has dark brown fur, often with lighter rusty patches on the belly, chest and base of the ears. It lives in eastern Australia, in Queensland, New South Wales, Victoria and south-eastern South Australia and feeds on a variety of plants including introduced and native shrubs, grasses and ferns.

The Swamp wallaby is found in eastern and southern Australia from Cape York to South western Victoria. They prefer thick undergrowth in the forest where they hide in thick grass and dense bush during the day, and come out at dusk to browse for food.

This was taken at the Cleland Wildlife Park in Adelaide. I had strawberries with me at the time and thought this particular wallaby would like a treat. Most of the wallabies were very shy and I could only get close to a few of them.