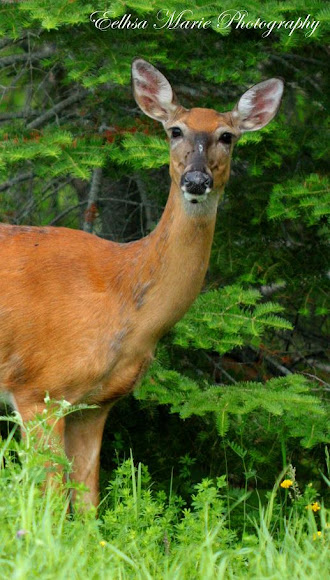 The White-Tailed Deer is also known and the Virginia Deer. This is a medium sized deer with a distinctive white tail that becomes most visible when the deer is alarmed. In the spring the coat of the White-Tailed deer is reddish-brown, becoming grey-brown throughout the autumn and winter. The size of the White-Tail increases in locations further from the equator. Male White-Tailed Deer (stags or bucks) re-grow their antlers every year. The size (length and branching) of antlers are determined by age, genetics and nutrition. Approximately 1 in every 10,000 females also have antlers, although this is usually associated with hermaphroditism. A buck's antlers begin to grow in late spring and are covered with a soft tissue called velvet. After all the females have been bred, bucks shed their antlers. (from late December to February).

The White-Tailed Deer is native to Canada, the United States, Mexico, Central America, and South America (as far south as Peru.) It has also been introduced to New Zealand and several European countries, including Finland, and Serbia. Where White-Tailed deer become very populous they can cause an extreme amount of damage to forests and also become a nuisance in towns, where they feed on trees, flowers and gardens. They also pose a threat on roads and highways.

In Northwestern Ontario the White-Tailed deer population has increased substantially over the last 10-15 years. As a result, many in this area find this deer to be a problem in regards to planting trees, flowerbeds and gardens. In relation to the increased deer population, predators, such as the Timber Wolf, have also become more numerous in the area. I observe these deer on an almost daily basis, even right in town, although more commonly in the local forest areas. Some of them are quite bold and come quite close.