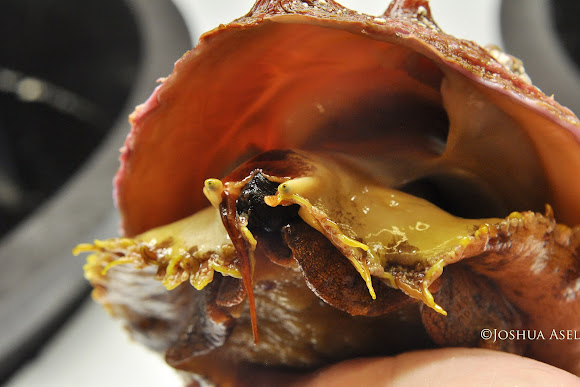 UC Davis's Bodega Marine Lab was amazing enough to let me photograph, for WEEC, this beautiful and endangered mollusk. Thank you to Kristen Aqualino and her colleagues for this rare and valuable opportunity. Like much of the wildlife living in the ocean, this mollusk has been over-fished. Another problem is that, for some reason, the White Abalone has been refusing to breed, especially the males. And in the wild, there are so few, it is nearly impossible for one to find another in order to breed. Only 6 months ago BML got them to breed for the first time in nearly a decade! A very rough estimation of 5,000 left in the wild. At the BML, they have 54 adults (only one of which is wild), 20 one year olds (4 and 5), and about 60 six month olds (6), which are considerably smaller than the one year olds. The six month olds being no bigger than 1 cm and one year olds ranging from 1/2 - 2 inches, at the largest and if memory serves. This adult (1, 2, and 3) is fully out of it's shell-something previously unseen by Kristen. And to me, looks more like a cute little alien. Bodega Bay, CA. This series is for "Endangered California", a project to find and photographically document 20 of California's iconic endangered animals. This is the first! Find more on our project: http://weconservation.weebly.com/project... Thank you :)

Thank you Marta and Mark! I am really happy they are helping too. Appreciate the comments :)

Fantastic spotting Joshua. Thanks for sharing this. Sure is alien looking.

This is a wonderful story Joshua! I am happy to hear they are doing an effort to help this species. Many thanks for sharing your story with us here in Project Noah!
And the abalone is cute indeed!