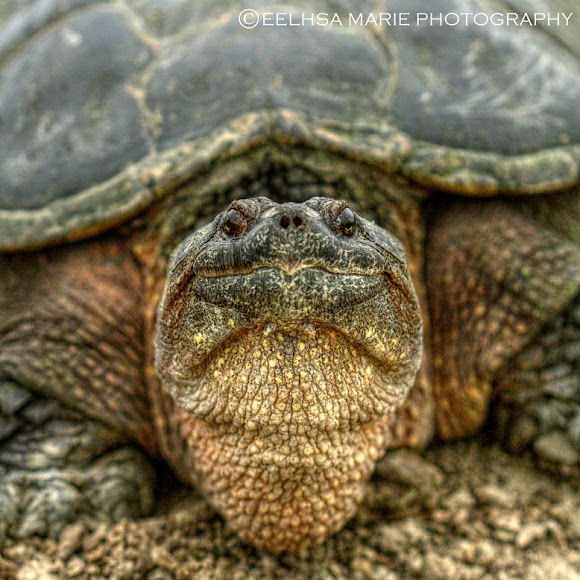 Common Snapping Turtles are known for their aggressive disposition, especially when out of the water. They have very powerful jaws and can move their head and neck around quite easily. The estimated lifespan for a wild Common Snapping Turtle is around 30 years, though they have lived up to 47 years in captivity. Common Snappers have ridged shells, with the ridges being more pronounced on younger turtles. Adult Snappers may have an upper shell length of nearly 50 cm (20 in), though the more common length is around 25–47 cm (9.8–19 in). They usually weigh anywhere from 4.5–16 kg (9.9–35 lb) and any larger weighing turtles are rare.

The usual habitats of the Common Snapping Turtle are shallow pond, shallow lakes or creeks and streams. They are occasionally observed basking in the sun, usually in the springtime. Snapping turtles are omnivores, eating both plants and animals. They are scavengers as well as hunters and eat a variety of aquatic life, such as: invertebrates, fish, frogs and reptiles, (including other turtles). They will even eat birds and small mammals if the opportunity presents itself.

This female Snapper came up from our creek to lay her eggs earlier this summer. We had a number of different female Snapping turtles come out of the water this spring/early summer. Usually we will see at least one or two. This turtle didn't mind too much that I was taking her photo. Usually when I have tried to photograph Snapping turtles they pull their heads back into their shells, but this one kept her head out the whole time and kept looking around. She was a larger turtle, so I think she felt less threatened. Although these turtles are not as flashy or pretty as the Painted Turtle, they are very prehistoric looking, especially the tail, and they always remind me of dinosaurs.