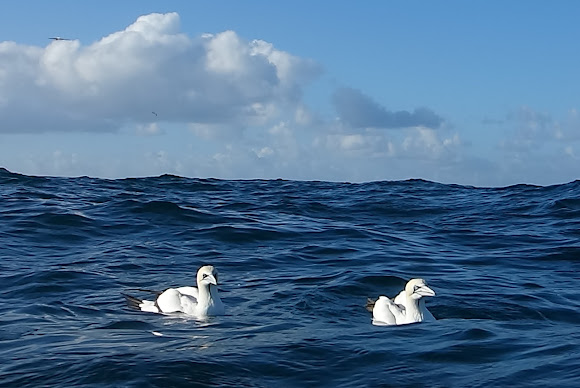 The Cape Gannet (Morus capensis) originally Sula capensis, is a large seabird of the gannet family, Sulidae. They are easily identified by their large size, black and white plumage and distinctive yellow crown and hindneck. The pale blue bill is pointed with fine serrations near the tip; perhaps because of the depth and speed of the gannet's dive when fishing (depending on altitude, gannets hit the water at speeds of between 40 and 120 kilometers per hour, its beak has no external nostrils into which the water might be forced.

Saw this during the annual sardine migration, also referred to Sardine Run. During the Sardine Run, the Cape Gannet hunts on the Sardines, plunging into the sea at great speed like a torpedo