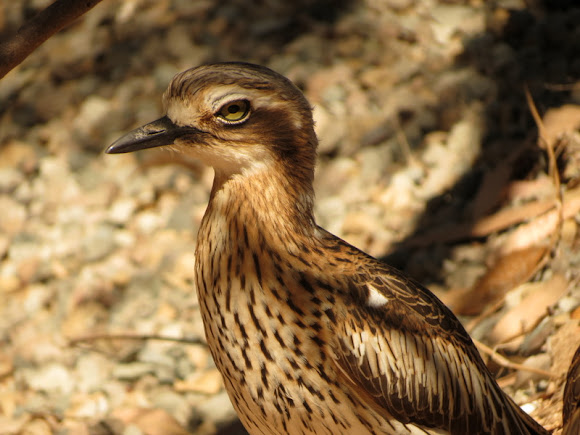 A large, ground-dwelling bird of extraordinary grace and beauty. It is endemic to Australia and nearby islands. It was formerly known as the Bush Thick-knee. Although the Bush Stone-curlew looks rather like a wader and is related to the oystercatchers, avocets and plovers, it is a dry-land predator: essentially a winged terrestrial carnivore. Like most stone-curlews, it is mainly nocturnal and specialises in hunting small grassland animals: frogs, spiders, insects, molluscs, crustaceans, snakes, lizards and small mammals are all taken, mostly gleaned or probed from soft soil or rotting wood; also a few seeds or tubers, particularly in drought years. Birds usually forage individually or in pairs over a large home range, particularly on moonlit nights. During the day, Bush Stone-curlews tend to remain inactive, sheltering amongst tall grass or low shrubs and relying on their cryptic plumage to protect them from their only natural predators: raptors. When disturbed, they freeze motionless, often in odd-looking postures. For visual predators like raptors (and humans), this works well, but it serves little purpose with introduced feral animals that hunt by scent: notably foxes.