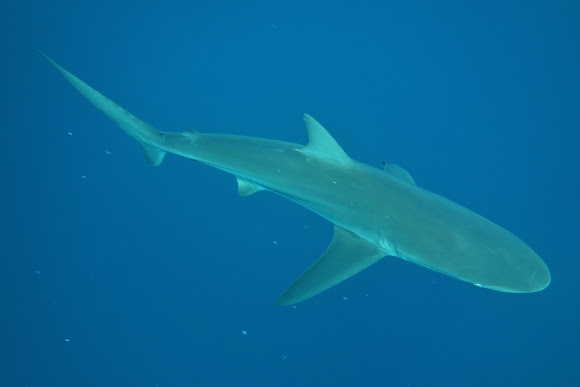 The dusky shark (Carcharhinus obscurus) is a species of requiem shark, family Carcharhinidae, occurring in tropical and warm-temperate continental seas worldwide. A generalist apex predator, the dusky shark can be found from the coast to the outer continental shelf and adjacent pelagic waters, and has been recorded from a depth of 400 m (1,300 ft). Populations migrate seasonally towards the poles in the summer and towards the equator in the winter, traveling hundreds to thousands of kilometers. One of the largest members of its genus, the dusky shark reaches 4.2 m (14 ft) in length and 347 kg (765 lb) in weight. It has a slender, streamlined body and can be identified by its short round snout, long sickle-shaped pectoral fins, ridge between the first and second dorsal fins, and faintly marked fins. Adult dusky sharks have a broad and varied diet, consisting mostly of bony fishes, sharks and rays, and cephalopods, but also occasionally crustaceans, sea stars, bryozoans, sea turtles, marine mammals, carrion, and garbage. This species is viviparous with a three-year reproductive cycle; females bear litters of 3–14 young after a gestation period of 22–24 months, after which there is a year of rest before they become pregnant again. Females are capable of storing sperm for long periods, as their encounters with suitable mates may be few and far between due to their nomadic lifestyle and low overall abundance. Dusky sharks are one of the slowest-growing and latest-maturing sharks, not reaching adulthood until around 20 years of age. Because of its slow reproductive rate, the dusky shark is very vulnerable to human-caused population depletion. This species is highly valued by commercial fisheries for its fins, used in shark fin soup, and for its meat, skin, and liver oil. It is also esteemed by recreational fishers. The International Union for Conservation of Nature (IUCN) has assessed this species as Near Threatened worldwide and Vulnerable off the eastern United States, where populations have dropped to 15–20% of 1970s levels. The dusky shark is regarded as potentially dangerous to humans due to its large size, but there are few attacks attributable to it.

Saw this during the annual sardine migration, also referred to Sardine Run