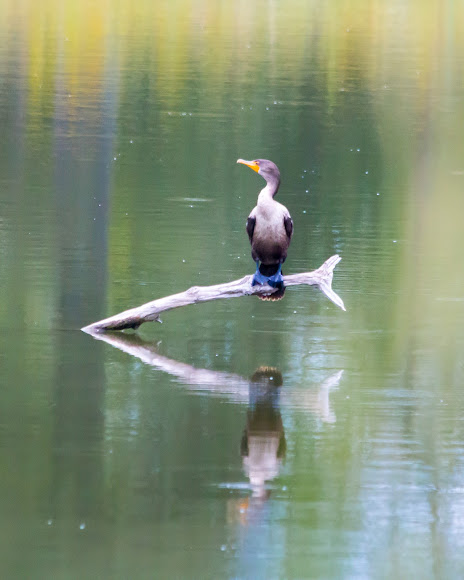 The double-crested cormorant (Phalacrocorax auritus) is a member of the cormorant family of water birds. Its habitat is near rivers and lakes as well as in coastal areas, and is widely distributed across North America, from the Aleutian Islands in Alaska down to Florida and Mexico. Measuring 70–90 cm (28–35 in) in length, it is an all-black bird which gains a small double crest of black and white feathers in breeding season. It has a bare patch of orange-yellow facial skin. Five subspecies are recognized. It mainly eats fish and hunts by swimming and diving. Its feathers, like those of all cormorants, are not waterproof and it must spend time drying them out after spending time in the water. Once threatened by the use of DDT, the numbers of this bird have increased markedly in recent years. The double-crested cormorant is a large waterbird with a stocky body, long neck, medium-sized tail, webbed feet, and a medium-sized hooked bill. It has a body length of between 70–90 cm (28–35 in) long, with a wingspan of between 114–123 cm (45–48 in). Double-crested cormorants weigh between 1.2–2.5 kg (2.6–5.5 lb). Males and females do not display sexual dimorphism. This species has dark-colored plumage with bare supra-loreal skin and gular skin that is yellow or orange. An adult in breeding plumage will be mostly black with the back and coverts being a dark grayish towards the center. Nuptial crests, for which the species is named, are either white, black or a mix of the two. These are located just above the eyes with the bare skin on the face of a breeding adult being orange. A non-breeding adult will lack the crests and have more yellowish skin around the face. The bill of the adult is dark-colored. The double-crested cormorant is very similar in appearance to the larger great cormorant, which has a more restricted distribution in North America, mainly on the Canadian maritime provinces; it can, however, be separated by having more yellow on the throat and the bill. The plumage of juvenile double-crested cormorants is more dark gray or brownish. The underparts of a juvenile are lighter than the back with a pale throat and breast that darkens towards the belly. As a bird ages, its plumage will grow darker. The bill of a juvenile will be mostly orange or yellowish.

West Ridge Nature Park in the heart of Chicago's northside, about a mile west of Lake Michigan. Large pond, surrounded by restored prairie/shrubland and forest, adjacent to a large, old cemetery.

This is the second time I spotted this species sitting on the exact same branch protuding from the water, however they are different individuals. This one is much whiter around the neck than the one in this spotting (one month earlier): https://www.projectnoah.org/spottings/12.... I think this one might be a juvenile.