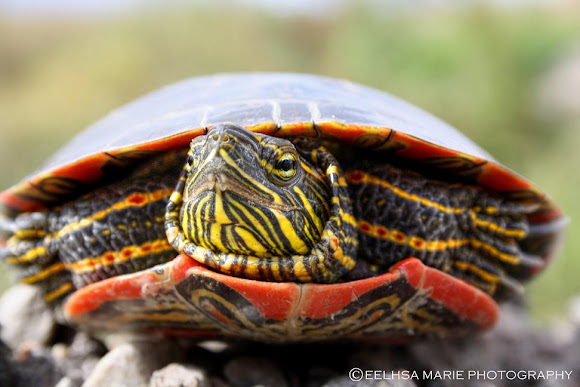 This turtle lives in slow moving fresh waters and has a very large range across North America. It is divided into 4 different subspecies, (Eastern, Western, Southern and Midland). The Painted Turtle eats aquatic vegetation such as algae, and small water creature such as crustaceans and fish. It is active during the day, depending on warmth from its surroundings. It hibernates in the winter months, usually in the mud at the bottom of waterways.

I found this particular Painted Turtle sunning itself on the edge of the creek on a sunny Autumn day. It let me take photos for awhile before it decided it had had enough and went back down to the water. Although I took these photos 3 years ago now, I have seen many Painted Turtles in this area since. I rescue them from roadways whenever I see them. They seem to be doing quite well population-wise in this area and every spring I'm sure to see a decent number of females come up from the water to lay their eggs.