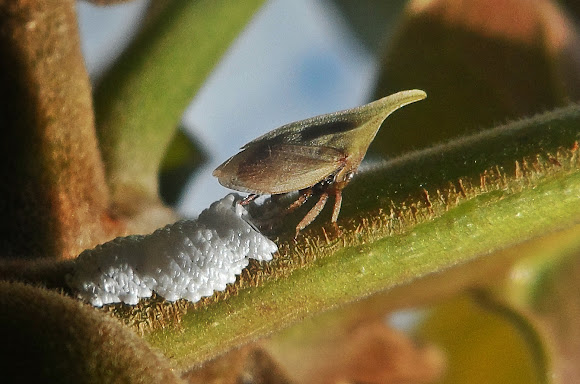 Treehoppers usually have one or more generations per year. Eggs are laid singly or in masses, either inserted directly into the living tissue of their host plant, or deposited on the surface of the plant. The females of some species coat their eggs with a frothy substance that hardens when dry. In temperate regions of North America, the eggs of most species remain in the plant through the winter and hatch in the spring at approximately the same time that the overwintering buds of the host plant break open and begin to grow. The young treehoppers feed by inserting their piercing/sucking mouthparts into the plant and sucking the phloem sap. In some species, the adult female guards her eggs and remains with the young, which stay together in groups called aggregations, throughout their development which may take a month or more. Many of these gregarious species are tended by ants. The ants collect a sweet secretion called honeydew from the treehoppers and, in return, protect the treehoppers from predators. The growing young, or nymphs, go through a series of five moults (shedding their exoskeletons) prior to reaching the adult stage. Adults locate a mate through the use of courtship calls, similar to those used by their relatives, the cicadas (but too faint to be heard by human ears without special amplifying equipment). Females usually deposit their eggs a few days after mating, but in some species oviposition (egg-laying) is delayed until the following spring, with the female hibernating through the winter.

I think Brazil is land of treehoppers!

Some of our gum leaf hoppers are always associated with regular patterns of white crusty markings encircling the small branches. I suspected they were traces of eggs or markers made of waxy stuff possibly. They way these eggs are being laid builds a great case for eggs. http://www.projectnoah.org/spottings/322...

thanks Riekos and Mark. Mark, what is the mystery?

Fabulous photos. You have just solved a mystery for me. Thanks.