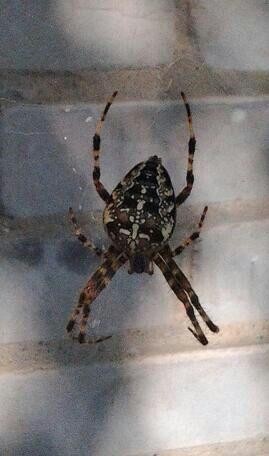 Also known as the diadem spider or cross orbweaver, European garden spiders are easily identified because of their distinctive white abdominal markings, arranged like a cross. Adult European garden spiders range in size from 6.5 to 20 millimeters for females 5.5 to 13 millimeters for males. The spiders range in color from light golden-red to deep gray, and have long darkly-banded legs. Newly hatched spiders are bright yellow with a single black mark on the abdomen, but change color with maturity (“Garden Spider”). The females build complex orbital webs up to 40 cm in diameter, using self-produced sticky silk (“Cross Spider”

European garden spiders can tolerate a wide range of habitats, including fields, gardens, forests, and urban areas. Lighted entryways and buildings provide exceptional habitat, as the light naturally attracts flying insects late in the evening. European garden spiders are found throughout Europe, the northern half of the United States and the southern provinces of Canada (“Cross Spider”). It is not native to the Americas, and was likely brought over from Europe (Jacobs).