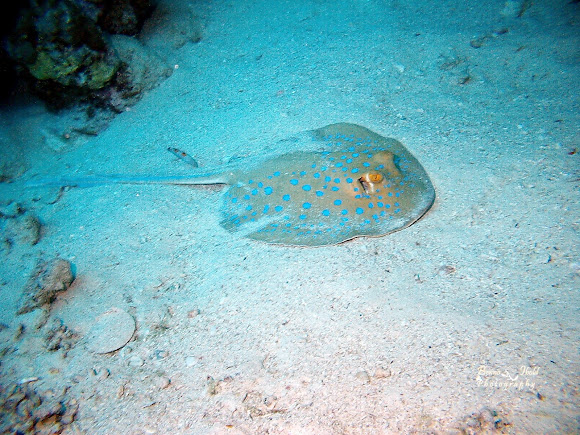 The bluespotted ribbontail ray (Taeniura lymma) is a species of stingray in the family Dasyatidae. Found from the intertidal zone to a depth of 30 m (100 ft), this species is common throughout the tropical Indian and western Pacific Oceans in nearshore, coral reef-associated habitats. It is a fairly small ray, not exceeding 35 cm (14 in) in width, with a mostly smooth, oval pectoral fin disc, large protruding eyes, and a relatively short and thick tail with a deep fin fold underneath. It can be easily identified by its striking color pattern of many electric blue spots on a yellowish background, with a pair of blue stripes on the tail.

Widespread in the nearshore waters of the tropical Indo-Pacific region, the bluespotted ribbontail ray has a range that extends around the periphery of the Indian Ocean from South Africa to the Arabian Peninsula to Southeast Asia, including Madagascar, Mauritius, Zanzibar, the Seychelles, Sri Lanka, and the Maldives. It is rare in the Persian Gulf and Gulf of Oman. In the Pacific Ocean, this species is found from the Philippines to northern Australia, as well as around numerous Melanesian and Polynesian islands as far east as the Solomon Islands. Rarely found deeper than 30 m (100 ft), the bluespotted ribbontail ray is a bottom-dwelling species that frequents coral reefs and adjacent sandy flats. It is also commonly encountered in the intertidal zone and tidal pools, and has been sighted near seagrass beds