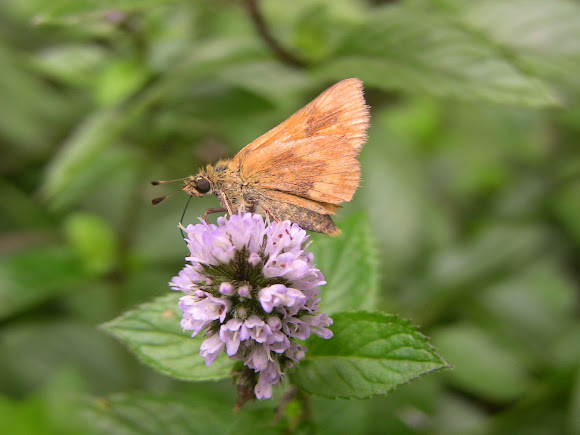 They look like butterflies, but they don't fly quite the same as other butterflies. When they fly, there's a skipping sounds coming from their wings. They're orange in color. From the website linked on this page, "Upperside is orange with toothed brown borders. Forewing has a black stigma (male) or a black diagonal band (female). Hindwing has a large reddish patch. Underside varies from yellow to reddish to brown; hindwing varies from unmarked to having a distinct band of cream to yellow spots."

They really like the flowers on my Chocolate Mint! (Mentha piperita). Grassy areas in chaparral, sagebrush, woodland, gardens, and small streams.

I had a difficult time identifying this species. Thank you to the lady who suggested skipper. From there, I had to figure out if it was a Woodland Skipper, Mardon Skipper or Sanoran Skipper. I'm fairly certain it's not Mardon, because that species is uncommon. I have no reason to think it's not Sanoran, but I have a few reasons to suspect it's Woodland. It looks a lot like other pictures of Woodland, and the Woodland is supposed to be common this time of year (late August - October).

My vote is for Woodland Skipper, because it's very common, especially this time of year (late August to October). The Mardon Skipper is supposed to be uncommon and even endangered.

It also looks like a Woodland Skipper and a Sonoran Skipper ... wow this one will be difficult to identify

Hmm, could that little guy be a Mardon Skipper Butterfly?

Skipper ... that seems so much more like it should be called. When they fly, it's quick, and their wings make a brushing, tisking sound ... almost like a cricket.

This is a variety of Skipper, not sure which one though.