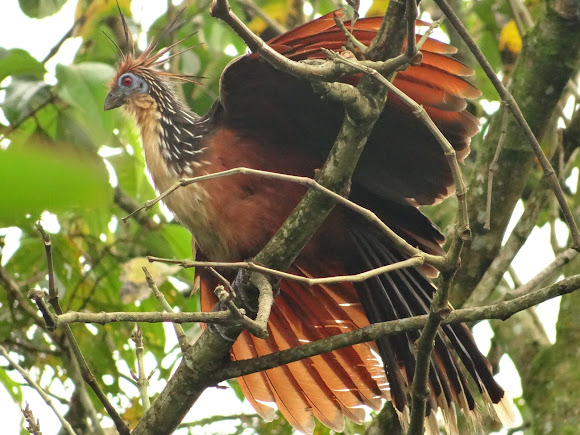 The Hoatzin is a species of primitive birds found in the neotropical jungles of SouthAmerica. It is one of the few birds with a digestive system specialized for eating leaves, which it digests through a big stomach along with the aid of bacteria; this peculiar dietary habit is the reason this bird is also known as "stinkbird" due to the harsh smell they emanate. Its chicks are characterized by their claws which appear on two of their wing digits, this is used as an aid in climbing trees after falling from one. Because of this feature, it was thoght that this bird was the closest evolutionary link to the archaeopteryx, the link between theropods and birds, but DNA comparison proved the contrary, the claws that the chicks have on their wings are an adaptation they evolved on their own, an example of convergent evolution with a huge time gap. They live in colonies of 10-40 individuals, taking care of their chicks by couples, which feed their young by regurgitating semi-digested leaves. You can also listen to their warning calls, which were triggered as a response of my prescence.

When I found them I was really excited, they are a beautiful, unique species. I found them in a colony of around 8 individuals. Simply espectacular, I was also able to see two chicks, but I wasn't able of getting a good shot of those, they were constantly falling down tress and climbing back up (with their wing claws). They are known by the locals as "Pavas" which translates from spanish to english "Female Fowls" which is indeed a mistaken name.

Thank you so much! I just updated it with new information!