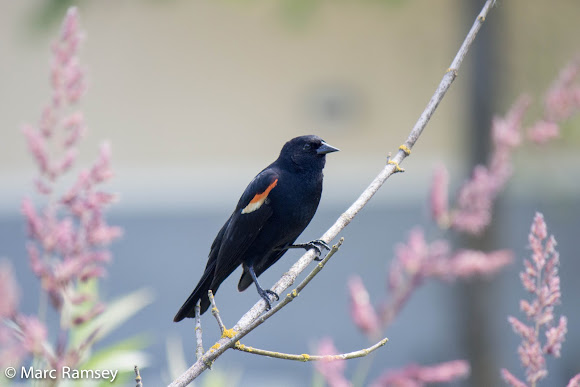 The red-winged blackbird (Agelaius phoeniceus) is a passerine bird of the family Icteridae found in most of North and much of Central America. It breeds from Alaska and Newfoundland south to Florida, the Gulf of Mexico, Mexico, and Guatemala, with isolated populations in western El Salvador, northwestern Honduras, and northwestern Costa Rica. It may winter as far north as Pennsylvania and British Columbia, but northern populations are generally migratory, moving south to Mexico and the southern United States. Claims have been made that it is the most abundant and best studied living bird in North America.[2][3][4] The red-winged blackbird is sexually dimorphic; the male is all black with a red shoulder and yellow wing bar, while the female is a nondescript dark brown. Seeds and insects make up the bulk of the red-winged blackbird's diet. [wikipedia]

Near a marshy pond.

The Male and Female had been calling each other quite a bit and the female as you can see has a dragonfly in her mouth. They danced around each other for a while.