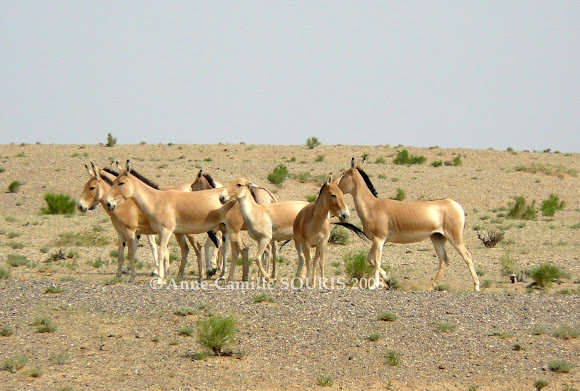 Photo of a group of Mongolian khulans taken in the Gobi Desert (Mongolia), in August 2008 by Anne-Camille SOURIS, during one of the mission she conducted with the Association GOVIIN KHULAN to protect this endangered species and its habitat. The Mongolian Khulan is one of the 5 recognized subspecies of the Asiatic Wild Ass and represent the largest population of the species in the world (about 80% of the total population). However, the Mongolian Khulan population has known an important decrease of about 50% since the end of the 1990's. Last counting conducted in 2007 estimated the population size to about 14,000 individuals, while in 1990 the population was estimated to about 40,000 individuals ... The Asiatic Wild Ass is listed as Endangered in the IUCN Red List. The Mongolian Khulan is listed in Appendice I of the CITES and in Appendice II of the CMS.

Today the population of the Mongolian Khulan is mainly restricted to the Gobi Desert, Mongolia, with small populations in Inner Mongolia and the Xinjiang province.

To know more about the Khulan and actions conducted by Goviin Khulan: http://www.goviinkhulan.com