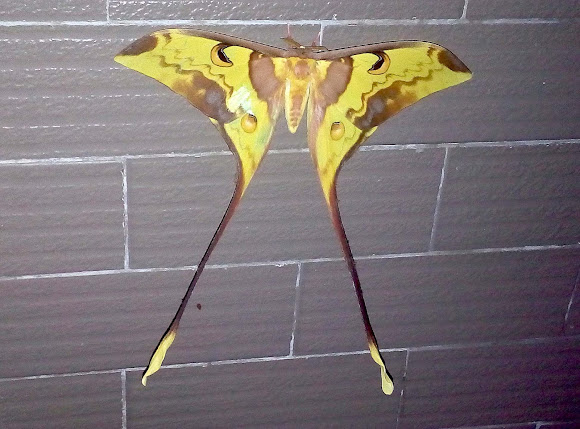 Saturniidae; Saturniinae; Actias philippinica Nassig & Treadaway,1997. "The family Saturniidae, commonly known as saturniids, by most measures include the largest species of moths. Adults are characterized by large size, heavy bodies covered in hair-like scales, lobed wings, reduced mouthparts, and small heads. They lack a frenulum but the hind wings overlap the forewings, producing the same effect of an unbroken wing surface. These moths are sometimes brightly colored and often have translucent eyespots or "windows" on their wings. Larvae are usually very fleshy, with clumps of raised bristles." Philepidoptera.

This Luna Moth was spotted by my nephew on the wall of the 7-Eleven Store downtown. He took this picture with his cellphone camera and gave me the picture for my biodiversity catalogue. He gave me four pictures, but the one shown here was the best. I was so happy to see his photos, but as nature lovers and photographers you can all imagine how I felt. I had spent years plodding all around the countryside. I looked in mangroves, farmland, forest fringes, up and down hills, always hoping to see this beautiful endemic moth, with no success. Then my favourite nephew walks into a 7-Eleven........well you know the feeling!

By comparing the picture shown here with the specimens shown in Philepidoptera, it can be seen that this specimen is a male.

Hi Sukanya, nice to hear from you again and thank you for your comment. Best wishes, John B.

It has been on my bucket list for years...I so empathize.