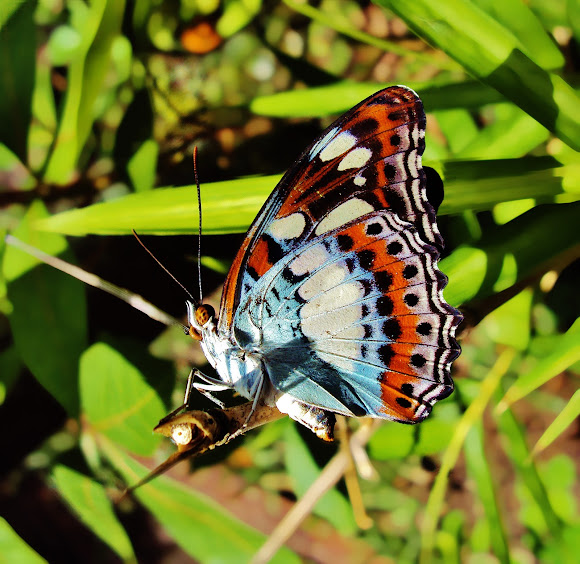 The Commander has a wingspan of about 6 to 7.5 cm (2.4 to 3.0 in). The upperside of its wings are a bright reddish brown. Towards the centre of the wing are broad white spots. In flight, one can see a bright red brown butterfly with a white band forming a 'V shape'. There are also a few white spots scattered on the wings. Its hindwings have crenulated margins. The undersides of the wings are a whitish gray toward the base and have a row of dull reddish brown and a row of black spots along the margins. The male and female are similar in appearance.

The Commander is generally found in forested regions having moderate to heavy rainfall. It usually keeps to low elevations, that is, up to 900 metres (3,000 ft) into the hills. It is fond of open glades, roadsides and clearings in forests. It is abundant along water courses in dry and moist deciduous forests. It is also found close to villages or wherever its larval host-plant Mussaenda frondosa is found. It is most common in the post-monsoon months and winter. The Commander can often be spotted basking with its wings pressed flat on exposed stones in streambeds. Individuals settle down on an exposed perch high up in the trees during the heat of the day. At this time it can be seen defending its territory and driving intruding butterflies away. This butterfly has a swift flight with rapid wingbeats and alternate spurts of smooth gliding. A powerful flier, it nevertheless flies for short distances at a time. Being wary, it maintains its distance and is best caught when engrossed in mud-puddling or feeding from flowers. It regularly visits flowers from low-lying herbs to high up in the trees. Though this is a mud-puddling species, in Borneo and probably elsewhere, adults do not visit carrion or old fruit to drink liquids.

the first shot is so beautiful!