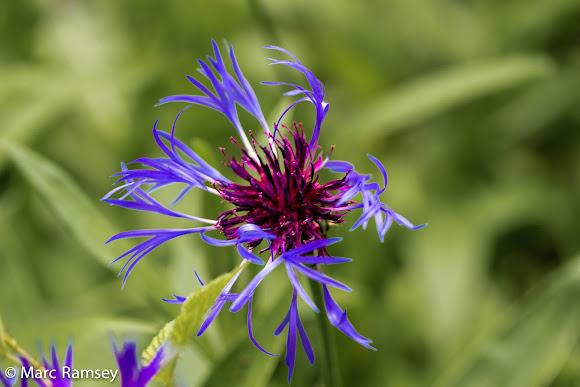 Centaurea montana (perennial cornflower, mountain cornflower, bachelor's button, montane knapweed or mountain bluet) is a species of Centaurea endemic to Europe. It is widespread and common in the more southerly mountain ranges of Europe, but is rarer in the north. It escapes from gardens readily, and has thereby become established in the British Isles, Scandinavia and North America. Flower of the Centaurea montana C. montana grows in meadows and open woodland in the upper montane and sub-alpine zones, in basic areas. It grows to 30–70 centimetres (12–28 in) tall, and flowers mainly from May to August. C. montana may be distinguished from other Centaurea species in the region by its usually entire leaves, and the blue-purple colour of the outermost ray florets. It may be distinguished from the cornflower, C. cyanus, by having a single (rarely up to three) flower heads, and by its being perennial, whereas the cornflower has many flower heads and is annual. The closely related C. triumfettii has more narrowly winged stems, narrower leaves and grows in rockier areas. [wikipedia]

It was by a ditch on the side of the road.

It looks as though this Mountain Cornflower (along with some of its friends) might have escaped from someone's yard, but it was in such an overgrown area that it looked right at home among other wildflowers and ferns.