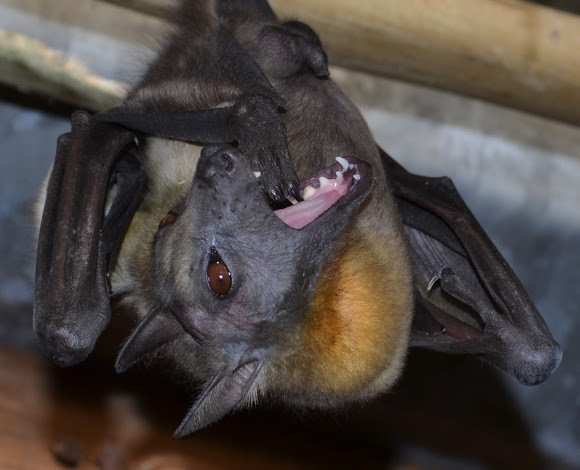 They are commonly known as the fruit bats or flying foxes among other colloquial names. Characteristically, all species of flying foxes only feed on nectar, blossom, pollen, and fruit, which explains their limited tropical distribution.

This one was photographed at Butterfly World in South Africa. They live in the tropics and subtropics of Asia (including the Indian subcontinent), Australia, islands off East Africa (but not mainland Africa), and a number of remote oceanic islands in both the Indian and Pacific Oceans.

This bat was victim to humanity's evil side. Stopped with a big group of reptiles and other exotic creatures at JHB airport. He is on display in Stellenbosch Western Cape, it has almost been a year and he still call Butterfly World his home.... shame... My first spot of this bat: http://www.projectnoah.org/spottings/129...

Every dentist would be happy to see this dedicated level of oral hygiene....

Thanks doreen. Yes these funny diseases really pose great threats to the natural world - one wonders where it comes from and why.

Just love the bats. Vermont has had a problem with white nose syndrome and many are dying in the caves. Nice pictures.

Thanks RiekoS, Wilson, namitha, Karen, Leonardo, Marta and rams4d! He is sadly the only one of his kind here, but he is well looked after! (It did not like the flash of my camera and I feel a bit bad - see how he closed up his eyes on the last pic! - love to visit him at this sanctuary!)

The pictures are spectacular!

I stare at this guy... Incredible. A gem of nature. Look at this face! A true dog with wings! Very nice spotting, Smith. Keep it up!

Awesome series Dez! It's a shame he can't be wild but at least he is safe!

Wow, it has wolf looking head.