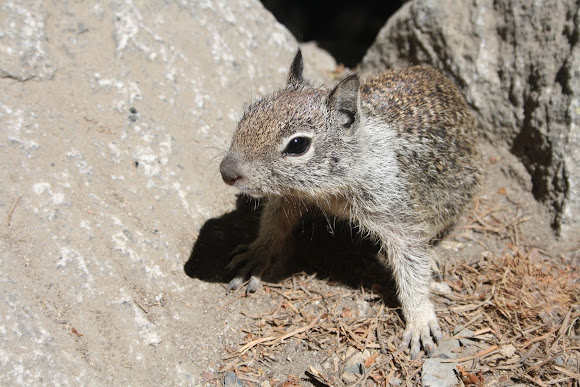 The western gray squirrel was first described by George Ord in 1818 based on notes taken by Lewis and Clark at The Dalles in Wasco County, Oregon. Compared with the eastern gray squirrel S. carolinensis or the eastern fox squirrel (which have been introduced into its native range), these squirrels are shy, and will generally run up a tree and give a hoarse chirping call when disturbed. Weights vary from about 0.4 to 1 kilogram (14 to 35 oz), and length (including tail) from 45 to 60 centimetres (18 to 24 in). It is the largest native tree squirrel in the western coastal United States. Western gray squirrels exhibit a form of coloration known as counter shading. The dorsal fur is a silver gunmetal gray, with pure white on the underside; there may be black flecks in the tail. Ears are large but without tufts. The ears turn reddish-brown at the back in the winter. The tail is long and typically very bushy. Tree squirrels undergo a complete head-to-tail molt in the spring and a rump-to-head molt in the fall. Tail hair is replaced only in the spring. Nesting mothers will use their tail hair to line birthing nests. Western gray squirrels eat berries, nuts, a variety of seeds, and the eggs of small birds.