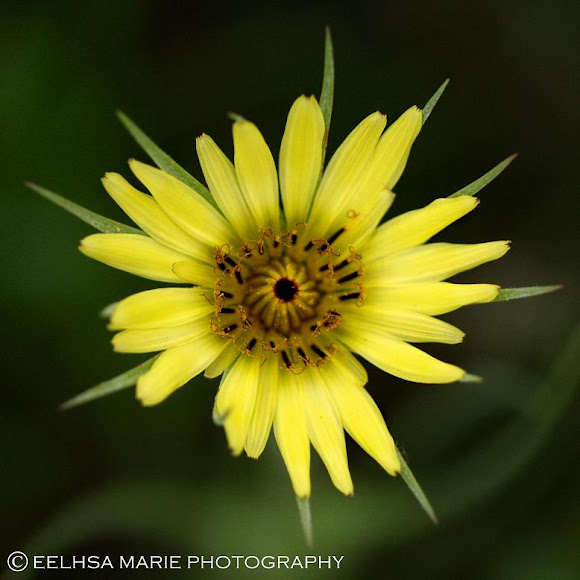 This beautiful flower is known by many different names, including: Western Salsify, Yellow Salsify, Common Salsify, Yellow Goat's Beard and Wild Oysterplant. It is a flower native to Southern and Central Europe, Western Asia and Northern France. The Western Salsify is typically an annual flower reaching average heights of 20-60 cm (8-23 in.). although occasionally it can reach heights of almost a metre. The flowers of the Western Salsify open early in the morning and close in the afternoon. The Western Salsify is similar in appearance to the more common Meadow Salsify, but has longer "bracts" behind the petals. Unlike other Salsifies, it is not usually thought of as edible, although the roots and young stems can be eaten. There are no commonly recognized medicinal uses for this plant.

The Western Salsify typically grows in warm, sheltered spots with moist soil. It was introduced to North America, where it has become very widespread. It is reported in all of the continental U.S. states, except a few in the far south-east and in all provinces of Canada except Newfoundland and the northern territories.

Earlier this summer there were many of these lovely flowers in the field across from where I live. I first noticed them last summer and thought they were very beautiful. Even though I grew up only about 20 minutes from where I live now, I never noticed any of these flowers there. I'm glad I was able to get some good photos of them this summer, they are one of my favourite wildflowers.