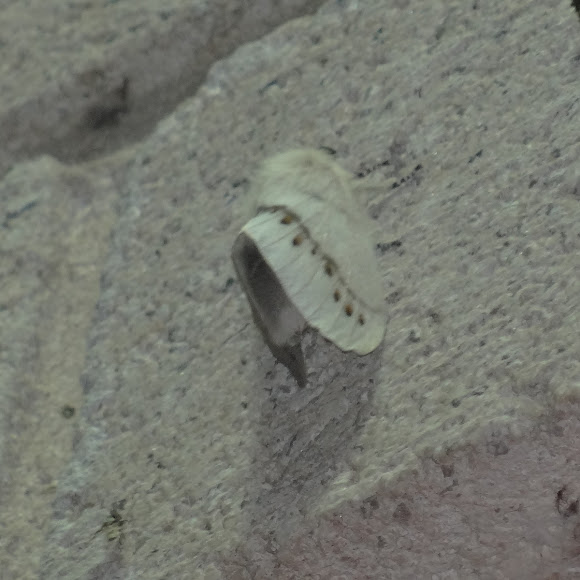 A large moth (estimated 50mm long) with a thick white mane and a line of black spots with orange centres near the outer margin of the white wings. Wings held in a high tent shape at rest. Some dark smoky colour under the rear.

Attracted to mercury vapour lights at the local school.

Only 2 shots for this one taken with maximum zoom as it was about 5 metres above me and refused to come down. Still there the following day. Spotting is therefore partly a placeholder in the hope it will be found there again.
Thanks Stephen Solomons for ID. Search would have been difficult because the male is black with brown trim !! Wingspan should be about 40mm
"White lasiocampid moth"
superfamily: BOMBYCOIDEA
family: LASIOCAMPIDAE
subfamily: LASIOCAMPINAE
genus: Pinara
Distribution... http://spatial.ala.org.au/?q=lsid:%22urn...

Well blow me down. How did you find that? Looks right to me. One of the 'lazy old camper days'... hmmm have to have a read. Thanks SS !!